From Tim Baker:  In 1865 the Churchyard was extended onto the site of the former Smugglers Cottages in Church Hill, close to the Old School House. The land was purchased through the generosity of the good folk of Courtlands in Sharpthorne.
To mark this, a memorial stone was fixed to the wall alongside the steps to Church Hill. 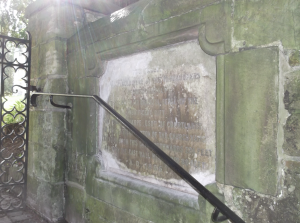 At some point the memorial was covered over in concrete, we believe during the Second World War when it was common practice to remove signs and references to towns and villages to help confuse the enemy during any likely invasion.
Now, some 70 plus years later thanks to The Friends of West Hoathly Churchyard Trust, the Sharpe Memorial is being fully restored and returned to its original condition.
Local Conservator Mr. Richard Cooke has removed all the concrete revealing the original wording, which will now be picked out and highlighted in the final stage of the restoration.
Next time you use the Church Hill steps, take time to view the progress which we hope to complete this spring.
Tim Baker 26.01.17.