“In Grinstead in Sussex suffered two men and one woman, the names of whom were Thomas Dungate, John Forman and Mother Tree, who for righteousness sake gave themselves to death and torments of the fire, patiently abiding what the furious rage of man could say or work against them; at the said town of Grinstead ending their lives the 18 July 1556” Foxe’s Book of Martyrs, John Foxe, 1563.

What had brought England to the state of persecuting and martyring her people for the sake of religion? 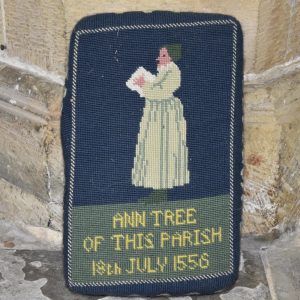 When St Margaret’s was founded in the eleventh century there was only one English Church and it was part of the Western European Church, acknowledging the authority of the Pope in Rome.

The Reformation started in Sixteenth Century Northern Europe as a reaction to some practices (such as the sale of indulgences to quicken the soul’s journey through purgatory) and spread despite attempts at repression. Protestant Churches were formed which denied papal authority.

The catalyst for the English split with Rome was Henry VIII’s desire for a male heir. He wanted to divorce Katherine of Aragon and the Pope refused to allow this. A series of Acts were passed culminating in the 1534 Act of Supremacy which declared Henry to be the head on earth of the Church of England.

After Henry died his young son Edward VI became King in 1547 and the pace quickened. England became a markedly Protestant country under the governance of Edward and his advisors but recusant Catholics were able to live without fear of persecution. However in 1553 Edward died aged 15 and was succeeded (after the brief 7 day reign of Lady Jane Grey) by his elder sister Mary Tudor. Mary was daughter of Katherine of Aragon and a committed Catholic. She tried to reestablish the Catholic church in England by recognising Papal authority reinstating Catholic forms of worship.

During the reign of Mary Tudor (aka Bloody Mary) those Protestants who refused to return to the teachings of Rome and acknowledge Papal authority were persecuted. Denial of Transubstantiation during the Catholic Mass was a capital offence. On 18th July 1556 three local people, Thomas Dungate, John Forman and Ann Tree, were accused of heresy and burnt to death in the middle of East Grinstead (in the road outside where Broadley Bros now have a shop). Ann Tree was referred to as Mother Tree in Foxe’s Book of Martyrs which suggests she was an older woman.  She is believed to have lived in the parish of West Hoathly (Ursula Ridley’s book “A Forest Village” claims she lived near Plawhatch).

These three victims represent just over 1% of the 288 people who were martyred for their faith during Mary’s five year reign.

East Grinstead was not the only town locally to witness such horror. Seventeen people were martyred in nearby Lewes and are remembered both in the town’s annual Bonfire tradition and in a memorial standing on the hill over the town. In all thirty six people were burnt to death in Sussex for refusing to return to Catholicism in Mary’s short reign.

The three martyrs have no known grave but a memorial stone each outside St Swithun’s Church in East Grinstead. In 1940 Ursula Ridley arranged for a memorial plaque to be placed on the south wall of St Margaret’s honouring her memory and faith.