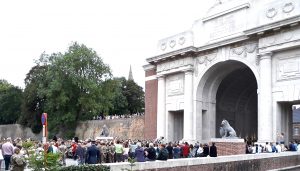 My husband’s Great Uncle, Charles George Neale, was killed at Passchendaele – The Third Battle of Ypres – on Monday 10th September 1917. His name, along with 35,000 others who were never found or identified, is on the wall at Tyne Cot Cemetery, He may well be in one of the “Known Only to God” graves here, of which there are nearly 9,000, or, who knows, he may be the Unknown Soldier buried in Westminster Abbey. 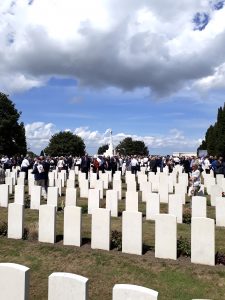 My husband’s Grandmother (his sister) and Grandfather went to look for his grave after the War but never found it, they were looking in France not Belgium. After some considerable research on the web, I managed to locate his whereabouts, unfortunately too late for his Grandmother.

Last year I read about a commemorative service which was being held at Tyne Cot on the centenary of the start of the Third Battle of Ypres, Passchendaele, 31 July 2017, to which anyone who had a relative who had either fought or died in this battle could apply for a pair of tickets; all applications would be put into a ballot. We were very lucky and, in March this year, we received an email telling us we had been successful. Out of 8,000 applications 4,000 had been selected.

The event was organised by the UK Government in partnership with the Commonwealth War Graves Commission, the city of Ypres, the Municipality of Zonnebeke and the Memorial Museum Passchendale 1917. Parking for the day was on a stretch of closed road close to the Memorial Park, called Beselarestraat. From here bus stops, A to F, were pick up points for the shuttle bus, of which there were several, to take you to Passchendaele Memorial Park. These were running between 8.30 and 10 am. Once inside the park you presented your tickets and passports and went through security checks, you were then given a wristband for the day together with a bag containing, among other things, a Commemorative Programme for the Tyne Cot event and commemorative wooden crosses, donated by the Royal British Legion, to be placed by graves at the cemetery. Tea and coffee were supplied and there were many organisations including the National Army Museum, the Western Front Association, the Commonwealth War Graves Commission and the Belgian War Heritage Institute. 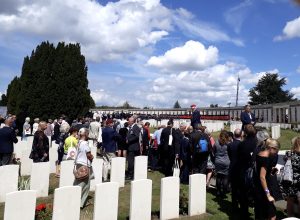 At 10 am we queued for buses to take us to Tyne Cot, about 5 minutes drive away. On arrival at the cemetery you were able to wander around or just sit and wait for the service. Unfortunately, because of Brian’s problems with his walking, we only just made it to the first set of seats, which were placed quite a distance from the central area where the monumental Stone of Remembrance and the speeches took place. There were, however, screens around the grounds so that we could follow the service. I would point out that Tyne Cot is the largest Commonwealth War Grave cemetery containing the graves and names of those who had fallen in WWI. As it still contains two German “blockhouses” (the Stone of Remembrance was built on the site of another “blockhouse” which had been used to care for the wounded after it was taken by the allies) the whole cemetery is on a slope, we were dropped off at the bottom of the slope so the walk up the hill did not help Brian’s condition.

While waiting for the guests to arrive we were entertained with military music provided by The Band of HM Royal Marines Plymouth, Band of the Welsh Guards and the Central Band of the Royal Air Force. At approximately 12 noon the guests arrived, HRH Prince Charles, the King & Queen of the Belgians, their Royal Highnesses the Duke & Duchess of Cambridge, The Rt Hon Theresa May and other representatives of the Governments and the War Graves Commission.

The Service commenced with “In Flanders Field” sung by the National Youth Choir of Scotland and consisted of speeches, readings from letters sent home by those who had taken part in the battle including a letter from an unknown German Officer after which flowers were laid at the German graves (there are a few just beside the Stone of Remembrance) and poetry interspersed with the Calling of Names from some of those who were buried in the cemetery. The service finished with a hymn “The Day Thou Gavest Lord is Ended”, a prayer, a bible reading by the Rt Hon Theresa May, Vice Admiral Sir Time Laurence, Vice Chairman of the Commonwealth War Graves Commission read “For the Fallen” and the Last Post was played followed by two minutes silence and the Reveille. Wreaths were laid at the Stone of Remembrance to commemorate all the nations who fought in the Third Battle of Ypres. Following the playing of the National Anthems there was a fly-past by the 350th Squadron, of the Belgian Air Force.

Having to move 4,000 or so people from the cemetery back to the Memorial Museum Passchendaele 1917 ground was going to take quite a while, in fact it took about 2 hours. After arriving at the Museum grounds we were given a packed lunch and were able to stroll around and visit the various tents. Every year the Memorial Museum organises a museum weekend with WWI 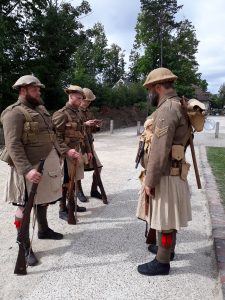 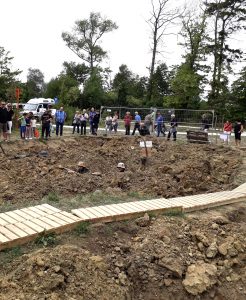 Living History. This year, because of the UK remembrance ceremony, it was held at the end of July. The focus lies on Living History which gives you a sense of stepping back in time, more than 300 WWI re-enactors from both home and abroad spend the weekend at the Zonnebeke chateau grounds, now part of the museum, where there are encampments with field kitchens, a Commonwealth Graves tent for registering the names and details of those killed in action, numerous demonstrations and re-enactments, an area full of shell holes where participants from all sides face each other as they did during the battle and which is traversed via duck boards while a recording of the bombardment plays in the background as well as exploring the museum itself.

The day ended with coaches taking you back to where your car was parked. A very well organised and enjoyable day which left you treasuring the memories of those who gave their lives for the future generations. May they never be forgotten. 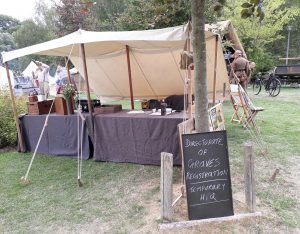 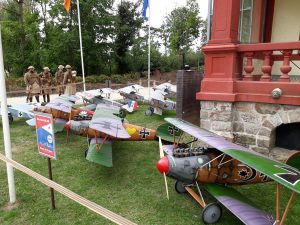 In the evening we ventured into Ypres and the Menin Gate to watch the ceremony of the Last Post and the laying of wreaths, which takes place every evening at 8 pm. Another very moving and wonderful tribute to the many whose lives were so quickly and tragically cut short.